One of my favorite responses of those who are attempting to deconstruct the Orthodox Faith from within (lovingly called “liberal” or “progressive” Orthodox) when they are confronted with indisputable Scriptural and Patristic realities that clearly refute their secular “opinions” is – “your a fundamentalist!” Or, “That’s a fundamentalist stance/argument!”

Clearly, there is nothing more horrible than being a fundamentalist! Interestingly enough this term, fundamentalist, was invented by “liberal,” “progressive” Protestant scholastic and intellectuals of the 20th century who were promoting novel doctrines, even for the Protestant world. They promoted things such as higher criticism of Scripture, questioning of the miraculous accounts in the Scriptures both Old and New Testaments, the virgin birth of Christ and even other basic (fundamental) doctrines held in Classical Protestantism (and Christendom in general). The more traditional Protestants who contested these innovations were labeled “fundamentalist.” O, you actually believe that God parted the Red Sea, how naive! You’re such a fundamentalist! You are clearly not as intelligent as us because you actually believe that these stories and miracles truly took place in history! We clearly know better than those simple and gullible folks of old who were bamboozled by these accounts. 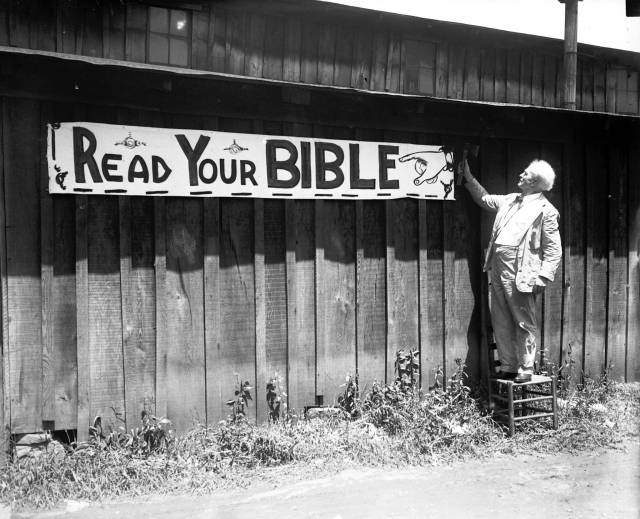 The label “fundamentalist” was developed by Protestant deconstructionists to shame those Protestants who at least were trying to defend the basic inerrancy of Scripture and what was left of basic Christian doctrine in Protestantism. “Fundamentalist” essentially meant – one who believes in the “fundamentals” of a more generally Traditional Christianity. Ooo, so ignorant! Thus, the “progressives” sought to label every radical group as “Fundamentalist” (the crazier the better) to further denigrate anyone associated with that name. You don’t want to be one of those types! It was a classic smear campaign.

This word has been appropriated by certain “Orthodox” who also want to deconstruct the teachings of the Church, of course, they are only trying to be open-minded and open to discussion (discussion is the covert way to say bring into question)! Yet, once a person refers to Scripture or the teachings of the Church on a certain subject “open for discussion,” such a one is called a “fundamentalist” or “quote bombing with the Fathers” or some other convenient prefab label to discount the fact that the topic which they desire to be so open to was already authoritatively addressed by the Church and is in fact not “open for discussion” or reevaluation.

Oh, horrendous reality, Orthodoxy is all about Fundamentals! The definition of fundamental is – so important as to be indispensable. Implies belonging to the very nature of a thing and therefore incapable of being removed without destroying the thing itself or its character. Synonyms are – essential, vital, cardinal.

It must be noted that under the Trojan horse of “being open-minded to discussion”  the liberal (more exactly the deconstructionist) philosophy seeks to infiltrate a said group or issue. Yet once within the walls, the soldiers pour out so to overthrow the city. Alexander Solzhenitsyn, a man who tasted first hand the wonder of liberal philosophy under communism, aptly states, Liberalism was inevitably displaced by radicalism; radicalism had to surrender to socialism; and socialism could never resist communism. The end result of the “open-minded dialogue” is what we see happening, for example, on college campuses in America – the active shutting down of all voices opposed to (after all they are just a bunch of narrow-minded haters!) the “Liberal Philosophy” (or whatever form/label it may be taking on). Its agenda is to appear at first open and tolerant. Yet once it feels in control, it then becomes extremely totalitarian, under the guise of delivering the world from “intolerance.” Liberalism is not truly open-minded, as it so loves to humbly claim.

As I’ve noted elsewhere Orthodoxy is about conforming one’s mind and heart to the Revelation of God in Jesus Christ through His Church. As Christians we are called not to be “open minded” but to “acquire the mind of Christ” (cf. Phil. 2:5; Eph. 23-24). And that mind is only found by entering “by the narrow gate; for wide is the gate and broad is the way that leads to destruction, and there are many who go in by it. Because narrow is the gate and difficult is the way that leads to life, and few there are who find it” (Matt. 7:13-14). Our mind must be traveling upon the “narrow” path of the Gospel.

The whole life of the Church consists of defending, preserving, the narrow way of the Mind of Christ, which is foolishness to this world (cf. 1 Cor. 1:18ff). St. John Cassian states, “The scheme of the mysteries of the Church and the Catholic faith is such that one who denies one portion of the Sacred Mysteries cannot confess the other. For all parts of it are so bound up and united together that one cannot stand without the other, and if a man denies one point out of the whole number, it is of no use for him to believe all the others” (The Seven Books, Bk. 6, Chap. 17).

Oh my, St. John says that there are fundamental beliefs, and to deny them is the deny the faith. Elsewhere he says, “He then must be outside the Church, who does not hold the faith of the Church” (The Seven Books, Bk. 3, Chap. 14).

St. Vincent of Lerins has these words to say about those who wish to bring into question the clear teachings of the Church, “He despises as vile and worthless the whole Church of Christ, and its doctors, apostles, and prophets, and especially the blessed Apostle Paul: he despises the Church, in that she hath never failed in loyalty to the duty of cherishing and preserving the faith once for all delivered to her; and he despises St. Paul, who wrote, ‘O Timothy, guard the deposit entrusted to thee, shunning profane novelties of words;’ and again, ‘If any man preach unto you other than ye have received, let him be accursed.’ But if neither apostolic injunctions nor ecclesiastical decrees may be violated, by which, in accordance with the sacred consent of universality and antiquity, all heretics always, and last of all, Pelagius, Coelestius, and Nestorius have been rightly and deservedly condemned, then assuredly it is incumbent on all Catholics who are anxious to approve themselves genuine sons of Mother Church, to adhere henceforth to the holy faith of the holy Fathers, to be wedded to it, to die in it; but as to the profane novelties of profane men – to detest them, abhor them, oppose them, give them no quarter” (A Commonitory, Chap. 33).

St. Theophan the Recluse says, “My teaching is not my own, nor it should be. In this sacred office nobody should, nor even can, preach his own teaching. If I or someone else ever dare to do so, you can put us outside the Church” (Why Orthodox Christianity Should not Change with the Times).

He agrees with St. John, if I teach wrongly regarding the teaching of the Church, put me outside the Church. Orthodoxy is right Faith, right belief. One can dress up in glittery vestments and yet if one promotes teachings contrary to the Faith, those fancy clothes will do no good.

St. Theophan continues, “We preach the teachings of our Lord, God and Savior Jesus Christ, of the holy Apostles … which is guided by the Holy Spirit. At the same time, we make sure to do everything possible to keep these teachings whole and inviolate in your minds and hearts. Every thought we present and every word we use, we do so very carefully, so as not to overshadow this brilliant and divine teaching in any way. Nobody can act differently … ‘Whoever then annuls one of the least of these commandments, and teaches others to do the same, shall be called least in the kingdom of heaven.’ (Math. 5:19)

This means that anyone who wrongly interprets the commandments of God and lessens their validity, will be an outcast in the future life. This is what He said at the beginning of His preaching. He assured the same thing to Saint John the Theologian, the beholder of ineffable revelations, to whom He described the final judgment of the world and the Church, indicating in the Apocalypse (Book of Revelations): ‘I testify to everyone who hears the words of the prophecy of this book: if anyone adds to them, God will add to him the plagues which are written in this book; and if anyone takes away from the words of the book of this prophecy, God will take away his part from the tree of life and from the holy city, which are written in this book.’ (Apoc. 22:18-19). (Ibid, here is the full article – http://www.orthodoxpath.org/spiritual-life/why-christianity-should-not-change-with-the-times/ ).

The above should suffice to demonstrate that holding to the essentials, the fundamentals, of the Faith is indeed what every Orthodox Christian is called to do. The Church has never been tolerant of falsehood. Those who seek to seductively deconstruct the Faith are the ones who are denying the Faith and putting themselves outside of the Church; though they may be still physically in it, spiritually they have left. (We see this on a number of levels today, for example, the push to accept as normal particular acts and states clearly condemned as sexual immorality; pretending like the male priesthood is just a crusty holdover from “patriarchal” times; the heresy of ecumenism, that is that there are many “churches,” such as defined at the pseudo-council of Crete, etc).

So when you are called a “Fundamentalist,” take it as a backhanded compliment. Why yes, I do desire to hold fast the fundamentals of the Faith. This is why the martyrs shed their blood, this is why the Holy Fathers and Mothers strove to defend the faith by every means – to preserve and make steadfast the Revelation of Jesus Christ, the Way, the Truth, and the Life. This Revelation is not up for reconsideration.