“But be ye doers of the word, and not hearers only, deceiving your own selves” (James 1:22).

True faith is both in word – theology, faith – and in deed – work, practice, application. Thus, there is no right faith devoid of right practice. St. Paul also echos this spiritual reality when he teaches “Not the hearers of the law are just before God, but the doers of the law shall be justified” (Rom. 2:13).

The Scriptures and the teachings of the Fathers make it abundantly clear that what is confessed with the mouth must be practiced and held in deed and action. The two are inseparable.

It is not enough to simply confess correct teaching and faith, for a person may make correct confession and yet have wrong action (that is action not in harmony with faith). In such a state one may, as St. James warns, fall into self-deception.

Archbp. Dimitry of blessed memory comments on the above verse, “St. James urges his flock not to deceive themselves in thinking that it is sufficient to give mental ascent to that word. In other words, failure to put the word into practice would make the preaching of it vain.” 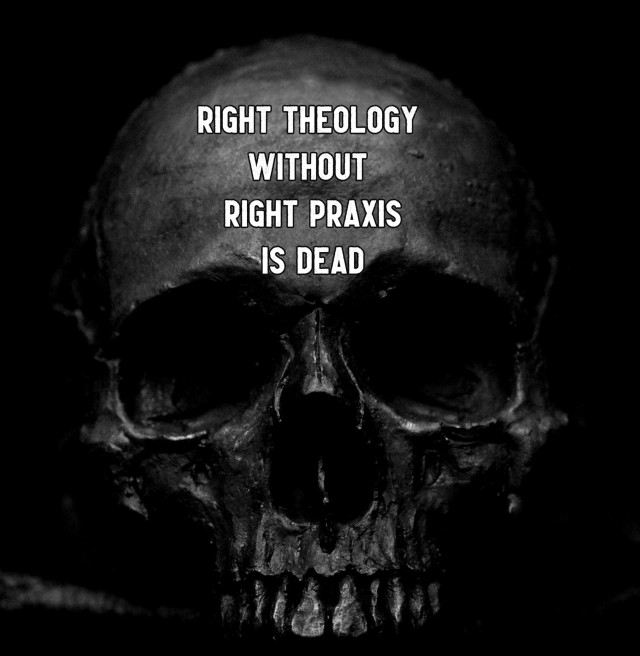 St. James asks a vital spiritual question, “What is the profit, my brethren, if one declares oneself to have faith but have not works?” Is faith able to save him” (James 2:14)? Works, above ergon in Greek, are the dynamic manifestation of the reality of truly energizing faith. Just as light and warmth are inseparable from the sun and each other, so are faith and works. They manifest one single true reality. There is no conflict between the two. A person cannot remove one and retain the other.

St. James applies the example of helping those in need (vs. 15-16) as a concrete manifestation of faith. Of course, this example is not exclusive, it is simply demonstrative and the principle which is being taught through it spans every aspect and manifestation of Christian life: even if we confess one way with our mouth and then in our actions fail to act accordingly we show that we, in reality, do not believe what we are proclaiming.

The primary spiritual guide set forth is – Christians cannot do in action that which goes against the clear teachings of the Faith. If an action is performed that betrays or undermines the clear faith then this reveals that there has transpired a loss of true faith. (Repentance is the cure!)

Mental acknowledgment and verbal affirmation of sound teaching is not enough (although it is a vital part), for such a state may be dead. Thus, Orthodoxy is not simply about right teaching, as vital as it is, for there cannot be right teaching devoid of right practice and life (and vis versa).

St. James elucidates this, “Even so faith, if it be not having works, is in itself dead. But some will say, ‘ you have faith, and I have works.’ Show me your faith without your works, and I will show you my faith by my works. You believe that there is one God. You do well. Even the demons believe – and tremble” (James 2:18-19)!

The demons know the right faith perfectly but it does them no good, for they refuse to let it energize into right praxis. Thus, one could be a sound “theologian” and in practice deny the faith. This indeed was the case with the Pharisees. The Lord rebuked them not for wrong “faith/theology” but rather for not putting into action that which they heard and mentally knew. “Then Jesus spoke to the multitudes and to His disciples, saying: ‘The scribes and Pharisees sit in Moses’ seat. Therefore whatever they tell you to observe, that observe and do, but do not according to their works; for they say, and do not do’” (Matt. 23:1-3).

The Pharisees had, as St. James said above, deceived themselves! Their knowledge of right teaching was of no use to them because they refused to actively believe in the Son of God who was manifested to them.

Archbp. Dimitry instructs, “Faith and works cannot be separated and neither can they be opposed to one another.”

Archbp. Averky of blessed memory observes, “Only the active fulfillment in life of all the moral requirements of the Law of God can make a person truly virtuous; otherwise his ‘religion is useless’ … ‘Useless religion’, that never goes farther than empty words often likes to teach others how to live.”

Therefore our Lord taught us, “If you know these things, happy are you if you be doing them” (Jn. 13:17). Makarios – true happiness – comes through the energizing of faith in right action. Thus the great imperative and need to hold steadfastly to correct praxis and not easily lay it down under pressure from the world.

The fallen world seeks through various means to stifle and extinguish right praxis because the spirit of the world understands how vitally important it is. If it can corrupt right praxis then it will thereby also corrupt right faith (that is, in a person or group, for the essence of the true Faith is beyond the corrupting powers of this world). It desires to foster “useless religion” and not “religion pure and undefiled” (cf. James 1:27).

St. Bede teaches, “One who neglects to keep His known commandments is not capable of being happy; one who scorns finding out about these commandments is separated much further away from the heritage of the blessed.”

And “failure to be willing to suffer” for the holding fast to the faith – its praxis – Archbp. Dimitry tells us, quoting St. Symeon the New Theologian, “makes us ‘believers in word only, not in deed. When deeds are absent, our faith is dead.’” And so, he concludes, “the truth is not something simply to be known; it must be practiced.”

Thus, as Christians, we cannot justifiably perform a praxis that is not in harmony with the clear teaching of Faith. And if any praxis obviously contradicts the evident teaching of Faith then it is indeed a manifestation of a loss of life and faith.

St. James warns, “As a body without the spirit is dead, so faith without works is dead” (2:26). That is, as Christians we cannot maintain “right faith” in our heads while performing works that may deny or undermine the faith in action. As the old saying goes, “actions speak louder than words.” In doing so we make clear that our faith is not true and steadfast. We become more like the one who built on the sand rather than one who suffered and labored assiduously to build on the rock (cf. Matt. 7: 24-28). Both heard the word of the Lord, that is they mentally affirmed right theology, but the one did not practice it and was swept away while the other put it into diligent practice and remained firm till the end.

May we comprehend and guard fervently not only correct theology but correct praxis also. For, to modify the words of St. James just slightly – right theology without right praxis is dead.

One thought on “Right Theology Without Right Praxis is Dead”